The Saturday before the antique bottle club meeting, a couple of my bottle digging friends gained access to an 1850 home in Kalamazoo. They probed the back yard and found two outhouse pits, which they dug. Both pits were the last two that were used, and newer, so they were somewhat disappointed. Clearly they had not been dug before because the root structure was intact, but the bottles were common. Well, you just never know until you dig!

The fellows, Sanjit, (pronounced Sän'gee) and Bill, cleaned up the dig site, then went to the door to thank the homeowner. The guys figured that the original, older outhouse pits had been destroyed when a newer outbuilding was built behind the house, so they questioned the homeowner about that. She had no knowledge of the builders finding any bottles. However, she did say that a carpenter found an old bottle when they had the front door replaced.

You see, these two diggers are professional! Seriously! You must leave no stone unturned!

In one of the digs that I was in on, a big three-car garage was built over at least two outhouse pits. The contractors do not completely dig the pits as we do, sometimes they just peel away the cap, but they do expose some old bottles. In this situation, the homeowner picked the bottles up, thinking that they may be of some value. However, by now he had all but forgotten about them-- until we asked!

We found that he had stored the bottles in a wooden box, back in a corner of that new garage. As I recall, there were a few keepers, including a rare Michigan whiskey that was worth at least a couple hundred dollars! Here is the kicker, the homeowner insisted we take the entire collection for free!

Meanwhile, Sanjit and Bill waited while the lady went to get her antique bottle. She had told the guys that the front door of the old house was big and had no window. After a long search, they found a modern door that fit well with the old home's architecture, but it was bigger and would require all new framing. The new door was much taller, so the area over the old door had to be removed. There, hidden in the wall was a bottle left by the builder 157 years ago!

Sanjit and Bill knew that it was what collectors call an "Historic Flask." Knowing just enough to know it was worth some risk, Sanjit offered the lady $100.00 for the bottle, which she gladly accepted. After leaving the home with their treasure, Sanjit phoned me on his cell phone.

I turned my first thought into words, "At this time of year, I am nearly broke!"

Early fall, when the kids are going back to school, it gets tough! Most of the guys are thinking about deer hunting, and many of the county fairs are going on. Well, folks are not thinking about metal detecting. Not me; fall is my favorite time for detecting and privy digging.

"Hold up, Sanjit! About how much money are you thinking?

"OK, I'll look it up, tell me what it is, then call me back in five minutes."

I found the bottle listed in the big Auction Price Report , but my copy is very old. It was printed in 1996! When Sanjit called me back, I told him that there are 9 different variants of this bottle, and in my older report they range from $120.00 to nearly $3,000.00! I told him;

"Sanjit, I still don't have a clue what this bottle is worth."

That narrowed it down. It put the bottle in the most desirable grouping!

"Al, the color is medium amber, and it is iron pontiled with a sheared top."

Amber is nearly, if not the most valuable color! So the price shoots right up! Iron pontiled means that this could be one of the oldest variants, so the price shoots even higher! The last part, the "sheared lip,"... well, that detail takes the "could be" out of the last sentence! This bottle is indeed one of the oldest! Also, because it is not chipped, scratched, and in an un-dug attic-mint condition, the price soars even higher!

"Sorry Sanjit, this bottle is out of my league! To be honest, I don't even want to see it! I would be better off if I didn't even know about it."

"Al, we put all of our cash together to buy this bottle and we need to raise some money so we can keep digging this weekend."

"Sanjit, just so that you will understand my situation, the very most I can spend right now is $300.00! So now you can see that you are barking up the wrong tree! I wish I could help you, my friend."

You could have knocked me over with a feather after hearing Sanjit's next remark!

I took the bottle to the bottle club meeting and it was a real show stopper! The experts were very impressed! Sometimes you just get lucky! 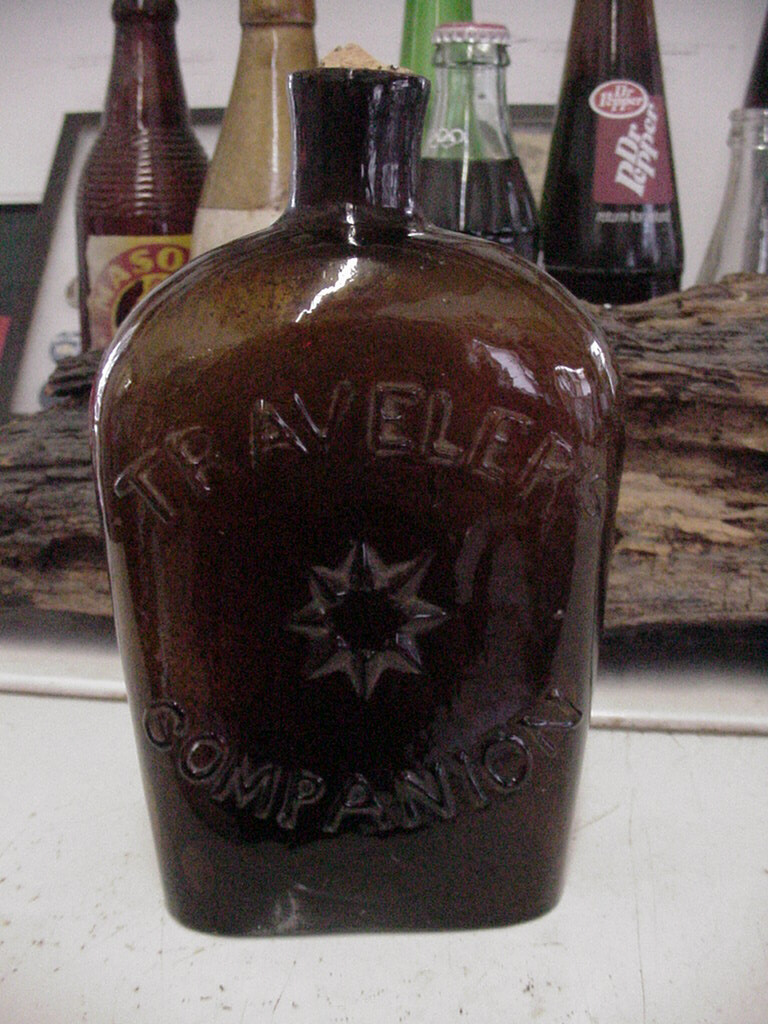 Behind the flask is a war log that was given to me by my friend Chip Manion. Chip found the war log at the location of the battle of Rocky Face Ridge in Dalton, Georgia. I had two great, great, great grandfathers who were involved with the fighting in Georgia during Sherman's March to the Sea.  The war log has a 50 caliber Confederate bullet lodged in it.