My friend and fellow club member, Skip Bladen, owns a business in Otsego called "The Lock Master." Skip works on locks of all varieties. One part of Skip's business is selling all types of quality safes. If you are ever in the market for a good safe to keep your treasure finds and other valuables in, Skip will treat you right.

A boyhood friend of my father's went to see Skip after having his house ransacked and robbed! Because I don't have permission to use their name, and I don't want to put them at risk again when the newsletter goes on-line, we will just call them Mr. and Mrs. Smith.

As I said, the Smiths had their house broke into, and many of their valuables were stolen. The thieves tore the place apart as they searched for anything of value. All of Mrs.Smith's jewelry was stolen, including some irreplaceable family heirlooms.

After this wake-up call, the Smiths decided to take inventory of what they had left, then take measures to protect it. In their search, they found an old bank that must have belonged to Mr. Smith's father. The little cast iron toy bank was made in the fashion of an old bank safe, with a combination lock on the front door. Mr. Smith wisely decided that the antique bank could very possibly be more valuable than whatever was in it, so he took it to the Lock Master to have it opened.

This was the first time Skip was asked to crack the combination on a toy bank, so he got a big kick out of the challenge. It turned out to be a bigger challenge than he expected! This was because the locking mechanism's linkage was partially jammed. The bank was so full of coins it couldn't have held another cent! 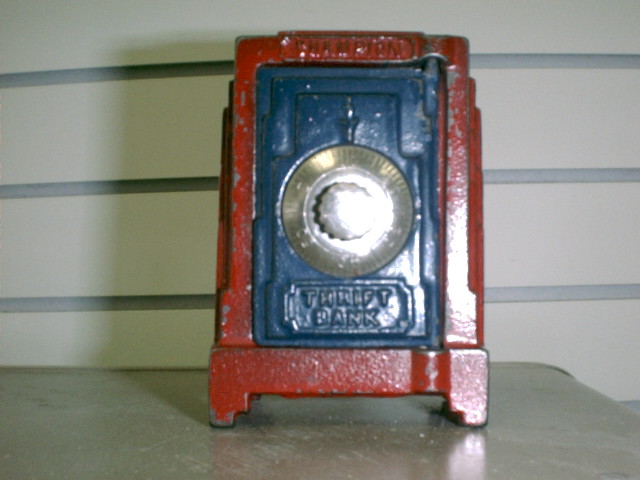 Skip was not going to let the little toy safe get the best of him. Besides, as a treasure hunter he had to know what goodies were inside the old bank. After considerable effort, the little bank's door swung open and out spilled hundreds of old coins! Skip was more excited than the safe's owners! There were Morgan Dollars, Barber Dollars, and Peace Dollars, as well as halves, quarters, dimes, Seated Liberty quarters, dimes, Indian head pennies--- the scene was eye popping!

Judging by Skip's excited reaction, the Smiths figured they must have some really valuable coins on their hands! So they asked Skip how much they were worth. Skip told them that he really didn't know, but he knew of someone who would.

In the meantime, I had been going through one of those occasional frustrating weeks. It just seemed like there was so much work to do and I was just spinning my wheels. Since Meijers and Walmart moved into the area, I have been seeing a trend develop, in which the guys will drop their wives off to shop, then come over to my shop and visit for an hour or two. I love to visit, and that really adds to the problem. I must keep working if I am going to stay in business. It was just one of those days when I wished I had an hour or to alone so I could get some work done.

That is when the Smiths brought their little bank, and countless coins, in for an appraisal.

"Skip Bladen sent us to you. Skip said that you are the man to help us out." I smiled and politely listened to their story, all the while thinking, "This is going to take hours!"

The Smiths had removed all the coins from the bank and sorted them, which was very helpful. As they started out by dumping the silver dollars on my counter, I grabbed a coin value book, pencil and paper, deciding that my goal was to get this over with.

As you would expect, the coins were very old and in very nice shape, all un-dug, and many had been in this bank for about 100 years. For the most part they were fairly common dates. Every now and then, a somewhat scarce date would show up and the Smiths could not believe their ears when I stated the values.

Clearly these folks had not been interested in collectibles, like our club members are, and frankly they did not understand the concept of rarity. A quarter worth $60.00 and a half dollar worth $40.00-- how can that be? They felt sure the silver dollars would be the most valuable coins and they could not understand why they were not--- it just didn't make sense!

We moved on through dozens of old nickels and dimes and, again, occasionally another slightly scarce coin would show up. A $50.00 value here and an $80.00 coin there, much to the Smiths' amazement. They were having so much fun sorting through the coins and cataloguing the value that I found myself getting into it, despite that small voice in my head that kept saying, "Al, you have lots to do!"

I thought we were all finished when Mrs. Smith pulled from her purse the largest container of all! Then she dumped about 100 Indian Head pennies on the counter. Immediately, I silently raced into a panic attack! I had to think fast because I could see a big part of the next hour or more slip away, when there was so much to do.

I finally explained my problem to the Smiths and explained that, on these pennies, we didn't need to worry about mint marks. So, we all began to turn the coins face up and I instructed them to be on the look out for dates from the 1870's.

I just could not believe the condition of these coins. It was easy to see how someone came up with the phrase, "Not one red cent." I have been looking at dug coins so long that I had forgotten how nice un-dug coins this old could look. Many of these 100 year old pennies still had their red-brown color!

"Here's one," Mrs Smith said excitedly! She handed me a beautiful 1870 in about EF condition. A quick look into the book showed a value of about $125.00 . . . and this coin may even bring more! The excitement filled the air.

I heard mixed with laughter, "You're kidding me!" and "I cannot believe this--- that much for a penny?!!!" Quickly we all settled down, and the hunting continued for more treasure coins.

This time it was Mr. Smith's turn. Almost as though the excitement was getting the best of him, he held out his hand and simply said, "Here's one." The small coin dropped into my hand, as I shifted my head to look through the strongest lens in my trifocals.

I was looking at the wreath side of a beautiful extra-fine Indian Head cent. All of the tiny horizontal and vertical lines in the shield above the words ' ONE CENT' were sharp and clear. The coin seemed so ancient, yet so beautiful. I turned the coin over gently in my hand, holding it by its very edge like a rare photo. The Indian and his headdress caught my eye at first and then I focused on the date . . . I remained cool! I thought to myself, "These folks are the same age as my parents, and they really do get excited! This could be worse than a stress test!" Now, as I think back, I should have asked if they have any medical problems or if they were taking any medications? What I was holding was the rarest of all the Indian Head cents, the 'key-date,' as the collectors like to call it. There was no mistake about it-- the date clearly read 1877!

When I told the Smiths that their coin had a wholesale value of about $800.00 and a retail of up to $1300.00, at first there was the quiet of "Shock and Awe!" Then, just as if the music started, we all began to dance! Well, almost! We paced the floor, arms waving, we pounded our fists on the counter. As Bob MacDougall's father used to say, " HOLY MACKEREL!!"

This turned out to be my best day of the month. I told the Smiths that when computer traffic get's up to speed, right after Thanksgiving, I will list the coin a E-bay for them . . . I'll keep you posted.