At the end of November, Lost Treasure Online ran an article about our club. This piece was written and published in their magazine about three years ago. In the article the writer made reference to a story regarding an old root cellar. Since then, several of our newer members have quizzed me about that incident. I thought it would be fun to revisit that event.


Part of what I enjoy when I go detecting with my father-in-law, up in Michigan's western U.P., is simply riding to the sites that we are going to hunt. As many of you know, my father-in-law, Bob, is a retired logger who really knows his way in the north woods. During his logging days he was fascinated by the deep woods and its many hidden secrets-- secrets that from time to time over the last 40 years, he would discover. These secrets of the woods are now almost invisible. These were once locations of early lumber, mining or railroad camps and ghost towns. Not only did Bob make some mental notes of these locations, but often he would research these sites. Ever since my wife and I gave him his first detector for Father's Day a few years back, we have been hunting these areas together.

As I mentioned, getting there is half the fun. I get a chance to sit back and enjoy the scenery. And in the western U.P. the beauty is breath-taking. Of course the journey to these sites is often miles of two-track driving deep into the woods. The wildlife is awesome! The site of a mother bear with her cubs, the red, summer coat of the White Tail deer, wolves, beavers, eagles, woodcock . . . I take it all in as a precious, treasured gift from our marvelous creator.

On this occasion, we were heading to an old hunting camp. As we drove along, Bob related a story associated with the site that we were about to detect. I guess you could say this story has become a local legend.

The old hunting camp was, in its day, a large well-developed spread. There was a group of cabins, equipment sheds and a mess hall, as well as other buildings. This site was used for several years until the end of the 1800's when it was destroyed by a forest fire, then never rebuilt. The story about the old camp starts several years after its destruction by fire.

A woodsman who lived off the land, trapped, hunted and even attempted to prospect in the area, hiked deep into the woods. He started this trip into the woods much later in the season than usual. The area, which was best known for its long hard winters, was enjoying a late Indian summer. Thinking he would capitalize on the unusually good weather the old woodsman decided to work his trap lines one more time. The hike would take about ten days if everything went well . . . which it didn't. 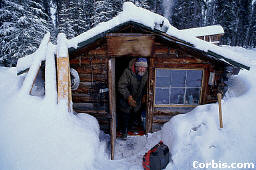 MODERN UPPER MICHIGAN LINESHACK
Like most trappers, he would use crude shelters called line shacks along the course of his trap lines.
He was well over half way through his journey and deep in the woods when a winter storm moved in. At first the woodsman thought nothing of the snow. In fact, tied to his heavy pack was a set of snow shoes for just this problem.

As it turned out, this storm he was facing was like nothing he had ever seen! Snow fell so hard that he could barely see more than few yards ahead. What made matters worse, the storm had trapped him as he was cutting cross-country. How he wished the storm had hit him while he was near the river. Instead he was far from anything familiar.

To avoid a deep two-mile crevice where the river was impossible to follow, he would cut through the forest. Eventually he would intersect the river downstream where he would find one of the trapper's shacks.

The trail was familiar to him; that is at least when he could see it. It was kept trampled by other trappers and roaming deer. After just one hour of heavy snow, the wood's floor all looked the same. Getting his bearings from the sun or the stars was hopeless with dark gray clouds overhead. To make matters worse, using a compass in Iron County is all but useless, because of the ground's iron content.

The snow started out with large, wet flakes which came down like a shower. Within a short time he was soaking wet and soon the rapidly falling temperature froze his clothes and beard. Disoriented and cold, he tried to set up his small canvas tent which was nothing more than a wind break. By now, the wind was furious and defeated his every effort. He soon realized his struggle against the sharp, cold wind was for his life! Finally, he wrapped himself in the canvas, then covered himself as best he could in the already deep snow. The night passed slowly and the snow was growing deeper by the minute.

By morning the snow had let up, yet the sky remained dark with clouds. Knowing the north woods at this time of year, he realized this could go on for weeks, even months. His best chance of survival was to take shelter at the closest line shack . . . but clearly he was lost. Looking around as he moved slowly through the woods he hoped to spot a familiar landmark. Nothing looked familiar! He feared he was walking further and further in the wrong direction . . . perhaps to his death.

For a short time the snow let up enough so that he could see about an eighth of a mile in every direction. He strained to see as far as possible before trudging any further. That's when he noticed what looked like a clearing. It was hard to know for sure, from this distance he was not sure if it was a clearing, or if his eyes were playing tricks on him. Something deep inside seemed to tell him to take a closer look.

Yes, it was a clearing, perhaps the site of an old cabin or camp. He could not recall ever seeing this before, which only confirmed he was lost! The surface of the snow was level except in three areas which measured about twenty feet square. In these areas the snow seemed to indent about six inches. Without a doubt this was once a camp and these were areas dug under the buildings. Little good that would do him. Oh, how he wished one of those buildings were still standing! Then he noticed a depression caused by a much longer building. This could have been a bunkhouse. On the other hand, if this was a work camp, or perhaps a hunting camp used by a lodge, this may have been a mess hall. All these thoughts ran through his mind as he approached the larger indentation.

The snow was starting to come down hard once again as if to remind him of the danger he was facing, that's when he noticed a large hole in the ground several yards away. As he approached the opening, he reached back to take his rifle from its sheath. If this hole was big enough to provide shelter, he wasn't too anxious to share it with a critter.

When he looked into the opening, he was surprised to see steps! It was a root cellar! At first he broke a long stick from a nearby tree and probed into the hole as far as he could reach to announce his presence. Then with a rag and some lard from his pack he used a shorter stick to make a torch. As he entered the man-made cave, he could not believe his eyes! There before him were porcelain cooking pots, glass mason jars with coffee, beans, rice, flour, etc. Was he dreaming? Had he been in the snow too long? Was this a mirage? No, it was all there before him! There were two oil lamps stored next to two cans of lamp oil. There was even a large pile of empty flour and potato sacks.

He struggled to get his doe skin gloves off, then he quickly put one of the lanterns to work. His first order of business was to seal the doorway of his new found shelter. As he kicked the heavy snow away from the sides of the hole, he found a heavy wooden door. When he lifted it from the snow, he found evidence of the camp's demise. The door's outside was charred from the heat of a forest fire. Had it not been at ground level, it would be gone....................

As my father-in-law brought his truck to a stop, he finished the story. Bob told me this was the camp where the old woodsman survived for weeks in one of the worst winter storms in upper Michigan's recorded history.

Some believe this was a story spun in a northern bar. The more the story teller's mug was refilled, the better the story got. Bob went on to tell me that one of the reasons some doubt the story is because the root cellar was never found. "Do you believe the story is possible?" I asked.

"Sure it's possible, some of it makes sense, but I am not too sure if I believe it," he replied.

Bob's story really made the area more interesting! As we detected around the site, it wasn't long before we discovered the camps large trash pit. The pit was hidden beneath a heavy layer of leaves. We both took an interest in this. Soon our detectors were propped against a tree and we started removing the remains of dozens of rusted cans. We had hoped to find some 1800's bottles and did we ever! The sad part was they were the most common early bottles known too man. . . . worthless catsup bottles! We did find a Hutchinson type soda bottle and a neat paneled Dr. Tobias Venetian Horse Liniment bottle.

When the trash pit was thoroughly explored, I went back to detecting. I wasn't at it very long before I felt nature calling. Being modest I decided to deal with this in private. I noticed a slight rise to the ground and decided to retreat to the other side of it. As I walked over the gentle rise, I noticed the ground seemed spongy. When I reached the top, panic took over . . . I started to sink! Before I had a chance to think about what was happening, I was standing in a hole more than six feet deep! I must have let out a holler because Bob was looking down at me in no time at all! While my mind was racing to figure a way out, I realized just before me was a stairway. When I turned around, I saw porcelain pots and plates sitting on earthen shelves cut into the walls. On another shelf there were large empty canning jars. Beneath my feet was the large rotted beam that once supported the earth roof. I was lucky it let me down so gently! Right next to my feet were the remains of an old pair of leather boots. These boots were so big that made my size 10's look tiny!

We busied ourselves at the job of clearing away the earth from the cave-in. Then we searched the root cellar with a fine-toothed comb. There we found the remains of old lanterns, lamp oil cans, and old cloth sacks that were now like dust. I had hoped we would find something dated. A diary would have been nice!