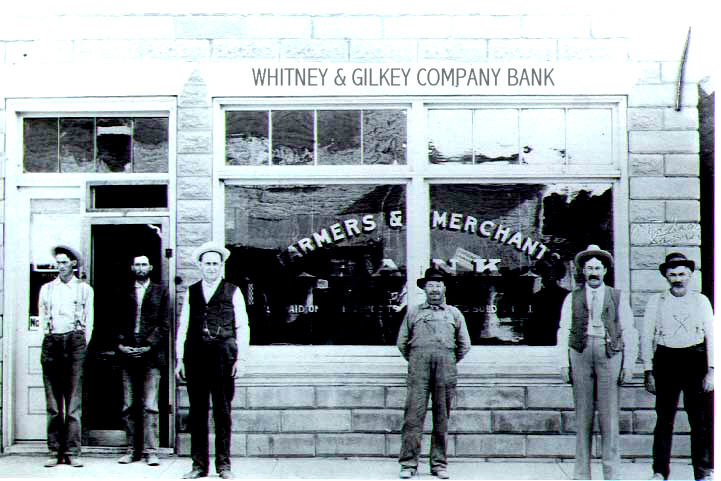 Just a few days earlier, the men visited the Richland Savings Bank and studied the bank’s layout. . this job had been carefully planned.  When at the edge of town, they hurried along the windowless
side of the whitewashed dry goods store, looking in every direction in a very nervous fashion.
Stepping onto the board-walk, it seemed the only eyes to notice them were a few horses tied to
the hitching post.

That day it seemed like the gang’s heavy boots sounded like drums on the wooden walkway.
This was something they never noticed before. .  but today was different. There were other sensations
which they  not noticed before, like the sound of their own hearts which seemed to be in their throats!
As they reached the bank the three men spread out on the board-walk. Trying very hard not to look
suspicious, they took careful notice of their surroundings. All was quiet, just as they had hoped it would be.  One lonely  farm wagon was slowly leaving town, heading south loaded with bags of grain.

As two of the men glanced at their leader, he nodded to them and took his position beside the huge oak
door. It was time to get this over with!  The outlaws pulled their sweat-soaked bandanas over their
noses while pulling pistols from their vests. They had no more than entered the stately building when a lady teller, seeing  the masked outlaws, let out a loud gasp! The tellers reaction seemed to get things rolling. The two robbers shouted out warnings of violence, then loud  instructions as they tossed canvas bags at the teller and bank manager.

As it was days earlier, the large, heavy  safe door was wide open as if to display the beautiful artwork
painted on its inside. One thief waved his gun motioning for the banker to start unloading the  drawers
inside the vault of their cash and valuables.  As each drawer was opened the gunman’s only order was “faster, faster!” The thief then  spotted several empty bank bags. They too were ordered ‘filled’ with anything found in the safe. Negotiable bonds, legal papers. . . everything was stuffed into the bags. Even a large, heavy sack of coins was carried off by the robbers with the other  of loot! When the men were satisfied with their take, the  two bank personnel were locked in the large safe. They hoped this
would buy them some time for a clean getaway!

As the men stepped from the building, their leader reached for some of the burden, then the three
men broke into a quick pace back in the direction from which they had came.  Their master plan continued when they reached the railroad tracks. The loot was quickly loaded onto a handcar waiting on a side-spur. As two men started pumping the car into motion, one member of the gang switched the rail permitting their getaway car access to the main line. The little hand car scooted along at a quicker and quicker pace as the men’s pumping increased to match the little trolleys downhill speed. The men soon reached their destination leaving the town of Richland far behind them.

When the car came to a stop, the men quickly loaded their plunder onto the three horses which
they had  tied in the woods near the track. It was clear that they underestimated the carrying capacity
of the horses! Some of the loot would have to be left behind! The first and most obvious choice was the bulging, extremely heavy sack of coins. And the second choice was the negotiable bonds.

A nearby hollow log seemed the best hiding place for the bonds. While one of the men wandered
further into the woods looking for a place to stash the bag of coins, he found a hole left by an uprooted tree that seemed like a natural hiding place for the coins. The hole was then filled  by caving in the sidewalls, then it was covered  with brush. Riding off, the outlaws fled to their hiding place where the money was to be  hid until the heat was off.

What? Sounds like another one of Al’s wild stories? Maybe it does, but this time it is no story; it is
true!  Back in the early days of our metal detecting club we had a young husband and wife team who were appointed, “Club Research Committee.” It only seemed natural as they were both history
majors at Western Michigan University. They came across  this story while searching old editions of
the Kalamazoo Gazette.

The old Gazette archives are on micro fiche at Western’s library. The first
account  they found was the original headline story which covered the robbery and  details of a clean get-
away. A follow-up piece revealed the bank robber’s total take and it mentioned that one suspect was
already being sought. The next update, carried by the Gazette a week later, announced that one of the
group had been arrested and it said he had identified his accomplices!  In that same news article, the  public learned that he had lead authorities to the hidden bonds!

What peaked our interest as treasure hunters with metal detectors was that the news-paper made it clear that the coins could not be found! It was also revealed that the bag contained “uncirculated” pennies! To make matters more interesting to us as a club, these unrecovered coins were 1898 Indian cents!

Judging by the lay of the land, at the time, north was only  practical direction for the robbers to escape. However, that direction was slightly downhill, and it was also the only direction for a “wooded area.” The southerly course had been throughly cleared for farming and was uphill. The possible location narrowed down to one  piece of ground! Sadly, the property was very clearly posted with warnings to any trespassers! Eleven years ago, club researchers reported the spot was covered with large up-rooted tree stumps.  The property owner was approached with the club’s desire to search the section of property.  The owner responded with a firm, NO!

Since then our student members went on to finish school, then moved west. Do the same people
own that land eleven years later? Were the coins ever recovered? The entire gang was sent to prison. It is
likely they served their time and were released. Was the bag of pennies worth looking for to them?
Personally, I think they were long forgotten. What do you think?  There is all manner of history surrounding the old railroad line that wound its way through Richland!

In the last newsletter I wrote  (from memory) about the 1898 bank  robbery which took place in Richland Michigan. The article was a big hit with a lot of readers. Thank you for your kind and
encouraging words. When I say, “from memory,” I wasn’t actually in on the robbery!

Just one day before I had to finish the newsletter, I put in a call to my friend Jack Short. Jack
works at the W.M.U. archives division photographing their acquisitions. I asked  Jack if he could pull the materials relating to the robbery. Jack’s passed the job to his friend, Sue Husband. Sue
dug up some amazing details!

My first mistake was telling you that there were three robbers . . .  there were actually  six. I was correct in saying that three did leave the scene on a railroad handcar.  Also, In my story, I had the
tracks running north and south. I find out now it was one that runs east and west. The track was then owned by  the D.T.&M line. Another flaw in my story was the time frame! The robbery actually
took place under the cover of darkness at 3AM. and the safe was blown open with nitro!

The bank was a private bank named, “Whitney, Gilkey & Company Bank.” The robbers total take was $5000.00. Here is a chronological list giving details following the robbery. This stuff is amazing!

Dec 6, 1898: Mamie Burkett, South Bend, promises revelations in bank job; involves Thomas (Whitey)Black. Black is girls’ step father. She turned against him because he married her mother
instead of her!

Dec. 16, 1898: Charles Russell is under arrest at Sandusky Ohio foranother offence but is wanted here in bank robbery.

May 9, 1899: Jury convicts Harry Slater and John Allison. Whitey Black is still at large.
Slater and Allison each 28 years of age, given 17 years.

May 13, 1899: George Wagner released after nine months in county jail. New suit and brown derby. Goes to Chicago. Joseph Gregory turned over to Calhoun County as suspect in robbery. William Kulp
turned over to treasure’s office as suspected counterfeiter.

Oct. 26, 1899: Charles Russell, who turned State’s evidence is released. Said to have tuberculosis.

May 11, 1900: Albert Peverett, alias Tom Black, arrested at Joplin Mo. For Richland bank robbery.
Black has been a fugitive.

1907: Richland reported aroused over plan to free York Allison. He escaped Jackson Prison in 1904 with Spellman and Slater.

1913: Albert Peverett (Whitey Black) is dead in Ohio prison. Sentenced for bank robbery. Dies after appendix operation. While in Jackson Prison he cut off his hand in a buzz saw.

Well, there you have it folks! Truth can be stranger than fiction!