Just what makes men and boys want to throw things into water that they are unable to navigate? Well, isn't it true? It seems as if there is something deep within us, even from childhood, that makes us want to leave our mark, so to speak.

As a very young boy, growing up near downtown Plainwell, Michigan, I was permitted to walk downtown from time to time. In the 1950's, this was still fairly safe, and I could do so from my home without walking across any main streets. Along my route, I crossed over the Plainwell mill-race, using the bridge in front of the old Plainwell Paper Mill.

I could never cross that bridge without stopping. At the center of the bridge, I would stand and stare in wonder at the dark, fast, rushing water below.

I really didn't understand the concept of a 'mill race.' I just thought of this as a part of the Kalamazoo River, instead of a man-made water diversion. All I knew for sure was that the dark and deep rushing water looked very mysterious and very powerful-- it still does.

As I read the children's story of Three Billy Goats Gruff,, this was the very bridge I had pictured in my mind! I was very-near certain that beneath this bridge, in the darkness, was the home of an ugly troll or even worse! Just in case, I was ready to answer back to him with the words of Big Billy Goat Gruff, " Well, come along! I've got two spears, and I'll poke your eyeballs out your ears; I've got besides two curling- stones, and I'll crush you to bits, body and bones!"

Sounds pretty brave? Well, I would have never crossed this bridge at night!

In the mid 1980's, during the coldest part of winter, a pair of women's shoes and some other personal effects were found on the bridge, along with a suicide note. As near as I have been able to learn, the body was never found. Oh, the dark mysteries of this old bridge!

As a young boy, the urge to throw something into that forbidden water was so strong that, with the complete absence of stones in the area, I would look in my pocket for a penny to toss into the raging deluge below. Just think, there has been a bridge at that location since before the Civil War. Should it be any surprise to learn that onlookers have been 'connecting' to this powerful scene for nearly 150 years by tossing in a coin? Or maybe, for the mill workers in the mid-1800's, it was an empty beverage bottle? Don't you ever wonder what treasures are hidden just beneath America's riverbeds? Boy, I sure do.

The most impressive river I have ever tossed a coin into was the Niagara River. If you have never seen this natural wonder up close, let me tell you, pictures do not tell of the majesty of the Niagara Falls! When you stand beside them, the power of the cascading water, with its thunderous roar, is very, overwhelming!

The American Fall's Museum was worth the time and the cost of admittance to visit --- at least once. On display are different devices like barrels and other capsules used by daredevils, who have tried to survive a trip over the falls. I had heard and read about such stunts, but it wasn't until I saw the falls up close, did I marvel at the incredible danger of such a stunt.

Anyone who has witnessed the power of the falls, must have been left spellbound, to learn that Kirk Jones, of Canton, Michigan, survived a 173 foot plunge over the falls this year--- amazing! 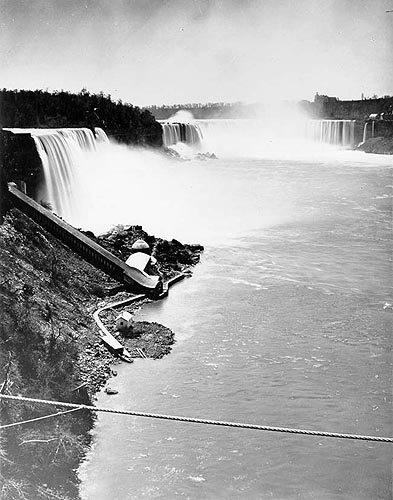 Rare 1882 photo of the falls in their full glory! Photo taken before millions of  gallons of water were diverted for energy production.

A television special about the history of the falls revealed something that really surprised me. The American Falls were actually stopped in 1969! That's what I said! Stopped! At first I couldn't believe it! It is easier for me to believe that we put a man on the moon, than to believe we were able to control the awesome power of Niagara!

The Army Corps of Engineers wanted to do a study on the general condition of the falls, to consider possible methods to control erosion, and possibly remove rock debris from the base of the falls. The method used for stopping the waterflow over the American Falls was accomplished by building an earthen dam, which diverted the water to the Canadian side.

As soon as engineers could inspect the base of the falls, besides finding millions of coins, they also discovered the remains of a man, a woman and the carcass of a deer, amongst the rocks.

Sometime just before the water had stopped, the man was seen diving into the water of the American channel. Three visitors thought that the man was a worker on the dewatering project. The man had walked along the shore until he reached the brink and jumped in.

While searching for the man, workers discovered the badly decomposed body of a woman jammed head first amongst the rocks about half way up the Talus Bank. The woman was clad in a red and white horizontally-striped jersey or dress and was found to be wearing a narrow gold wedding band with the inscription "forget me not" on the inside.

An interesting comment made in the TV special was, "The entire area sparkled with thousands of coins." Now you must know that under the rock debris there must be millions more! Many will date back to colonial times. To inspect the rock debris at the bottom of the falls, giant cracks or fissures had to be cleaned with pressure sprayers to remove buckets of foreign objects, most of which were coinage of every description.

With the tremendous power of the river's currents, like a hundred- thousand fire hoses all shooting at full blast, the majority of coins, bottles, rings & charms of every description are swept much further downriver.

Perhaps a short distance downriver from the falls, there are millions in gold, silver and copper coinage, rare hand-blown beverage bottles, jewelry and enough bones to fill a cemetery. Some interesting stuff to think about, wouldn't you say?

For a great web-site and some neat stories about the falls history, go to "Thunder Alley" at