The Chicora is just one of many missing Great Lakes ships. Sometimes, the wrecks which are found can be impossible to identify. One that should be of interest to metal detectorist was found 50 years ago.

In 1953 the U.S. Army Corps of Engineers removed the remains of an ancient side wheel steamer off Fort Gratiot Michigan, because it was an obstacle to passing ore carriers. The wreck caused quite a stir! When word got out, people began searching local records hoping to learn the identity of the ship that laid under their noses in just 20 feet of water for so many years!

Five boilers and part of a wheel shaft and hub of a paddle-wheel came up first. Then a second wheel shaft, a hand operated bilge pump, one hatch cover, steam cylinder, assorted pipes, even oak ribs were raised that summer. But none of the pieces identified the wreck, Experts said that the boilers were the type used before 1860 but there were no markings found on any of the relics.

Many years later, and after careful research, it was decided the wreckage was the steamship Northerner which collided and sank in that area back in 1856 after a collision with another ship, Forest Queen. 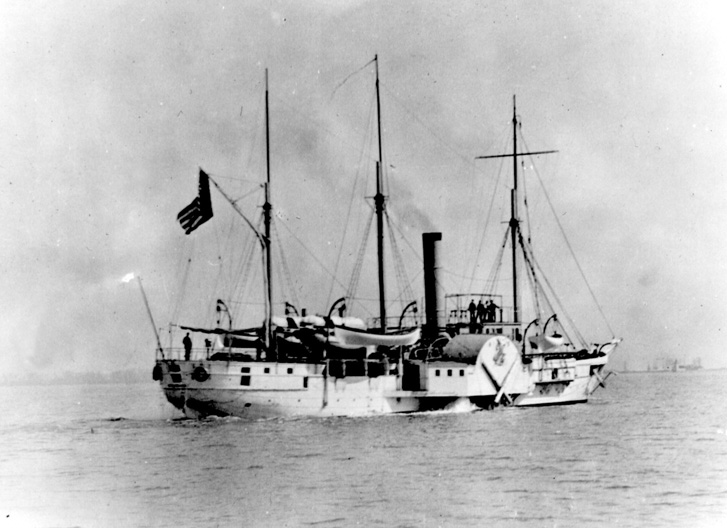 Twelve people died in that wreck but it could have been much worse.

The Northerner, under the command of Captain Darius Cole was steaming north from Cleveland to Saginaw with 134 passengers and crew as well as 50 tons of mixed freight. The night was dark and foggy when the two ships crossed paths. Keep in mind they were only lighted with kerosene lamps.

The Northerner was cut almost in two by the impact and she was gone in ten minutes! For five or six of those minutes, the ships were joined together and that time was used to save as many people as possible. Captain Cole jumped on- board the Forest Queen and ordered everyone to climb up with him. Cole and other crew members helped passengers make the climb which became higher and higher as the Northerner settled.

When the ships finally separated, Cole jumped back aboard his foundering ship launching lifeboats as officers ran through the halls kicking doors open and even found a few passengers asleep! The Port Huron Commercial a weekly paper never even mentioned the disaster.

With nothing used to mark the exact location, and with mass confusion on the drifting Forest Queen, the wreck location was lost. Making matters worse, with the areas deep shifting sand, the shipwreck not only disappeared from the top, it seemed to vanish from the bottom! The boat's papers, including the passenger list were also lost so there is no exact record of the total number of lives lost or how many people were actually on- board.

Here is something that I'm sure you treasure hunters will find interesting. The Northerner was carrying $25,000.00 in newly minted coins in her cargo hold! Now remember, I said coins! Coins that were to be distributed to banks throughout eastern Michigan! Coins of all denominations, gold, silver and copper coins most minted in 1856!

The Army Corps never found any coins when it moved the larger portion of the wreckage, in fact they had no clue as you now do! What they did find was sent to the Great Lakes Museum on Bell Isle.

The Northerner was built in Ohio City (the old name for Cleveland) in 1851. Captain Cole and the ship's purser, A.L. Kelsey had just purchased the vessel and this was their first trip up the lake!

The Forest Queen was repaired and continued in the rescue business! That's right! She would later to go down in the book of Great Lake's heros! Her most famous passenger lists were run away slaves! The Forest Queen served a long career as a slave freedom runner on the over-water link of the underground railroad! . . .Cool heh?

The Forest Queen ended her life like so many ships of her day, she was cut down and used as a tow barge. She sank in a Lake Erie storm in 1872 taking seven sailors to their deaths.

My wife and I are members of the Marine Historical Society of Detroit and receive their newsletter "The Detroit Marine Historian" which covers not only early Great Lakes shipping history but current shipping news. I just love this stuff!