A few weeks back, on a Monday, my long time friend, Deputy Richard Brooks, from the Allegan County Sheriff's Office, stopped in to my shop. He was driving a fully-marked police cruiser and came in carrying his clip-board. He had a very serious look about him, not the usual friendly smile, which I have become so used to. Usually the first thing Dick says is "Hi, Al!"

Not this time. The first thing out of his mouth was, "Al, we have a problem!"

It doesn't seem fair that I should have to feel my heart jump into my throat when someone in a uniform says something like that! But sadly, I have some troublesome family members, two of whom are my own children. They are not complete strangers to the police--- as much as I hate to admit it.

Then, there are my grandmother's renters-- they can sometimes spell trouble! Normally my mother takes care of these rental problems, but she is in Florida now. Then they can become my problem! It seems like every winter at least one of these old houses has been ending up on the news!

Two winters back, the house that was my great, great grandfather's was burned to the ground by the stupidity of the renters who were running a meth lab in it. A couple years before that, another country house was ransacked and the renters stole the aluminum siding. They tore it off to sell for drug money! So what could it be this time? All of this stuff raced through my mind in an instant.

Oh boy! Was I relieved to learn that it was only a murder--- did I hear that right? --- A MURDER!!? "That's right, Al. We need some help finding a bullet that is evidence in a murder investigation," Dick said.

Why do I always think of Batman's trusted friend, 'Commissioner Gordon,' of the famous Gotham City Police Department, when I am asked to, 'call in some help?' If I only had a powerful spotlight to project a huge image of a 'metal detector' (in lieu of a bat) on the moon, to alert everyone that help is needed. That way I wouldn't have to worry about forgetting to call someone as I make those very important contacts.

I sent out about 50 e-mails, and made a several phone calls, and was able to round up about a dozen guys. Tuesday we went out into the Allegan Forest looking for evidence, the only evidence in a terrible murder case! One small bullet was in a great big state forest-- a forest we were told by the D.N.R. that is 'off limits' to metal detectors! Oh, how I hoped they would drive by and see us!

The victim's background sounded very questionable (I dare say no more), making motives numerous. Someone had knocked on his door and, when he answered, they stuck a gun in his face and pulled the trigger! The blast put an end to his troubles (or trouble making, if that was the case), but the shooter left no evidence at the scene---- except that single bullet.

The autopsy showed that the bullet passed along the roof of his mouth and out the back of his neck. In his neck tissue, they found a small piece of thin copper. Then the bullet passed through the mobile home's interior paneling right near the ceiling, then passed through a tiny amount of fiberglass insulation. Finally the projectile ripped through the aluminum siding on the outside. . . and it was still climbing.

When we arrived at the crime scene, one of the officers placed a straight rod into the bullet hole in the wall, so that we could see the trajectory, or upward angle of the bullet's path. Just outside the wall, and in the direction the bullet was heading, stood a big, spindly tree. At first we thought the bullet may have slowed down enough to bounce off the tree and then drop to the ground. So right around the base of the tree is where I started to detect. It was then that we realized we were in big trouble! My detector was going off everywhere! The whole area was loaded with small metal trash! 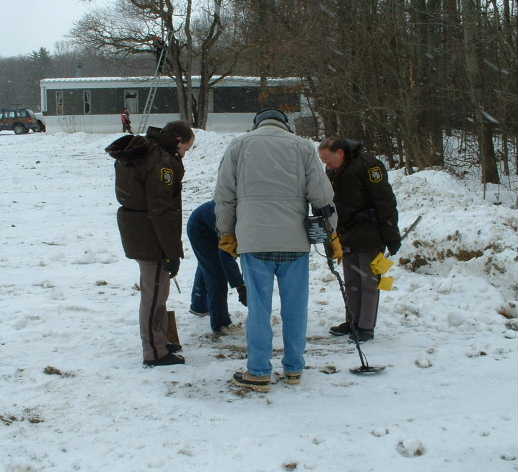 Picture shows:
Taken from the road looking across the plowed parking area. Mobile home is in the back ground. Club member Mark Sherwood bravely checks the tree with his detector for the bullet (he is at the top of the ladder!). Tom Latterner bends over to check a target that I just found with his pin-pointer, while Deputy Brooks (right) and another deputy look on.

If the bullet somehow managed to get past the tree, yet even slightly grazed a small twig or branch, it could have been sent off in an entirely different direction than we thought, quite possibly deep into the State Forest.

About 150 feet from the trailer was a gravel country road. Between the tree and the road was a parking area. You see, the victim was the watchman for this facility which, of all things, is a shooting range for a gun club! And to think we were looking for a bullet at a shooting range! Fortunately, the people using the range are shooting into the opposite direction as our killer-- at least we hoped!

Some of our hunters felt that the bullet cleared the road and was somewhere deep in the forest, so off they tramped deep into the woods. Where to start hunting was anyone's guess.

The detectives felt that the bullet was traveling at a nearly full speed, and had not slowed down to tumbling speed, when it exited the trailer.

Maybe I have watched Forensic Files, one of my wife's favorite shows, too much! When I saw the outside aluminum, I had to disagree with them. Having grown up around this 'trailer aluminum' all my life at Dad's RV business, I know how easy it is to puncture this thin, soft, metal. The thin aluminum would do little to slow the speed of the bullet. Also, this thin, soft metal would easily be punctured by the bullet. If the bullet was traveling even at half speed, it would leave a clean hole in the metal without tearing. Well, the aluminum was clearly torn, meaning the bullet had been slowed a great deal. I felt sure that it wasn't deep in the woods.

Sadly, the parking lot had been plowed of snow shortly after the shooting. This may have been done by someone with good intentions, perhaps by someone wanting to make the detective's parking during the investigation a little easier. As we searched this freshly plowed area, we got dozens of likely hits, but because of the plowing, the ground was frozen hard as a rock! This made our job very difficult! Great care had to be taken expose the targets. We needed to avoid contact with the bullet, if at all possible. With the frozen ground, we had to chip our way through the hard ice.

One of the ways we used to eliminate as many targets as possible, was by using detectors with accurate target-depth readouts. The target we were looking for, was not likely to be more than a couple inches deep, and more likely it would be on the surface of the frozen ground. Of course, those guys searching in the woods had four to five inches of snow to deal with, as well as a heavy layer of last season's leaves. Nobody said this was going to be easy!

Tom Latterner had his Periscope-brand pin-pointer with him, which came in very handy for checking the depth and overall size of the targets embedded in the ice. Yellow flags were placed at every target having the greatest potential of being what we were looking for.

By the time I had slowly worked my way away from the mobile home and had started working the road, Gene Carruthers had already scanned a large portion of it. Gene was about 30 feet from me, detecting near the middle of the west lane, on the mobile home side of the road, when he got a hit from a near-surface target frozen into the gravel. 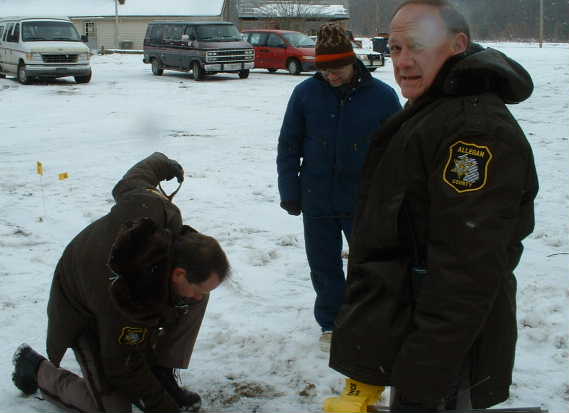 Tom Latterner watches as one of the deputies checks out a target. Deputy Dick Brooks watches as Don Benedict, Jr snaps a photo.

Gene called one of the detectives over to have a look at his find, which was barely visible, yet near the surface. The detectives noticed a fine vein-like thread of copper around what looked like a piece of gray-colored chewing gum. Right away they seemed very hopeful about this target! Soon a couple of the deputies were checking it out and I wondered what the excitement was about. As I walked over to see what Gene had found, Dick Brooks said, "Al, run your detector over this and see what you think."

I was running a new Whites MXT in the relic hunting mode, which was designed for battlefield hunting, and this target made the detector scream! Together we looked down at the detector's target ID meter, and it said, "BULLET!"

After the area was measured and photographed, the detectives carefully removed the bullet from the roadbed. It was indeed a copper-jacketed bullet, just as suspected it would be. The bullet's last few feet of travel was provided by the courtesy of a county snow plow. The plow, tumbling the bullet along with the snow, did little to damage it. We just hope the lab work will tell some more of the story--- and who knows? Maybe it can point to a killer!