George didn't realize it, but the music-like sound  he was enjoying was one that his great-grandchildren would refer to as "endangered." This "music" wasn't coming from a brass or stringed orchestra, but from the mode of transportation of his day. Two teams of strong, work horses  pulled  heavy wagons up the steep incline leading into the camp. The symphony of  sounds came from the rhythmic  hoof beats,  jingle of metal harness hardware,  wheel bands of iron crushing stone,  and the creaking, tortured oak frame of an overloaded   wagon. Combined, they created a sound which would one day  be replaced by  rattling, smelly, diesel engines.

Little did they know, the men were employed on a job that would one day play a part in winning two terrible World Wars! The iron rails they were laying  through the heart of Michigan's beautiful Upper Peninsula would carry   needed iron ore and lumber to  a country  that was growing fast.

George worked as camp cook. To hear some talk, he was the best cook the railroad had ever hired.  George's day  started  two hours before the  others. This morning, after the tall, quiet, Swede slipped into his clothes, he   silently  opened the cabin door. Suddenly, before stepping out the door, George stopped cold--- as if he had turned to stone. When he lifted his eyes in the direction his stove-wood pile, he saw four deer checking out camp. What really stopped George wasn't the four Whitetail does, it was what stood behind them.  Just beyond the rail grade, stood the largest buck he had ever seen!

Slowly reaching back inside the door, he felt for his loaded .38-55 rifle that he kept leaning against his bunk. The rifle was always loaded for just this sort of work. Up until now, his  new rifle had been used to chase off troublesome bears and occasionally wolves. But this time, with any luck, it would change the camp menu! Carefully, with slow smooth movements, he raised the gun and took careful aim. Very slowly he squeezed the trigger. . . the gun gave off its thundering report! The once peaceful forest seemed to echo back ten shots in return for his one! The ear splitting discharge from the rifle was still echoing as George saw his target bound off out-of-site down the opposite side of the grade.

As he ran in the direction of his prey, right behind him were some angry, puzzled men. Most were only clad in their sweat-stained red flannels.  By the time the men caught up with George, they were awake enough to figure out what had just happened.  When atop the grade, they stopped cold. Each one stared in disbelief at George who was kneeling by a giant buck! Each man smiled as he realized that this meant a break from the usual jerky and beans!
Without the camp boss saying a word, the workers took over the task of dressing the buck.  As George walked through the group returning to his morning duties, he received slaps of "Great job," on his back.

All that was over fourteen hours ago. Tonight, as the wagons pulled into camp with the tired, track laying,"Gandy Dancers,"  there was very little talk. Despite their tired condition, each face wore a smile. Perhaps that was because the air was filled with the aroma of hot venison stew and biscuits, something the men had looked forward to all day.
Today, the only thing left of the old rail camp is the now trackless grade itself. The shallow indentations in the ground where buildings once stood  are almost invisible.
Beep! Beep! My detector sounded off, signaling a buried target. I swept the target again watching the I.D. screen on the Minelab Explorer. The readout suggested a coin target at over six inches deep.  After scrapping away a layer of leaves and decaying pine needles, I pinpointed the target, then started to dig. What I found was a very old copper  shell casing. I knew it was old, but I didn't take the time to examine it closely. Several feet away from the first target, I received another coin-like reading. However when I switched into the pinpoint mode, I quickly realized the target was very large. When on an average coin hunt, I would have moved on to the next target. This, however, was a relic hunt and any old tool or antique hardware would be exciting to find.  Digging this target was more difficult because of  a tangled layer of roots. My prize turned out to be a huge, old, flattened cooking pot,  I am sure dated to the early railroad days.

My father-in-law, Bob Heimerl, was running his trusty Whites 6000-DI in the woods. Today , he was working without headphones and I soon realized the wisdom in that. As I wandered around in  the deep woods, I could see how easy it would be to get real lost! Most of the time we were out of view of each other and the beeping of his detector had a very calming effect on me. Without realizing it,  my  scanning pattern took me deeper into the woods. . . further and further from my skilled guide. When it occurred to me that I didn't know north from south or east from west, I stopped, pulled off my headphones, then tried to get my   bearings from the sound of his detector. The woods were silent! I looked in all directions and no matter where I looked everything looked the same. At this point I couldn't even tell which direction I came from--- panic started to set in! Just as I started to feel my heart in my throat I heard the most beautiful sound in the world, the distant sound of the  White's 6000-DI speaker. I scurried in the direction of the sound!  When I saw my father-in-law's tall, slender silhouette, I calmed myself, controlled my breathing, then  wandered up to him as if there was never a problem. Oh, that male pride! Frankly, I was never so glad to see him! 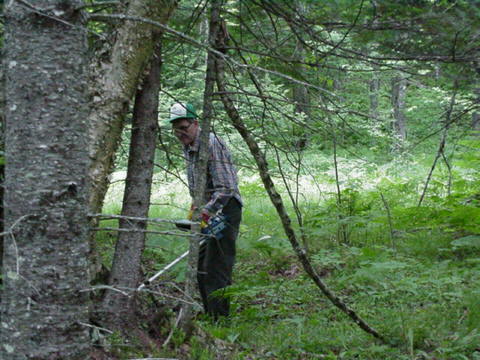 My father-in-law Bob, the Woodsman!

When we first arrived at this spot the beauty of the deep woods left me speechless. Bob pointed out to me the features of the old camp. Recently, the state of Michigan made a snowmobile trail which cut across the old grade and through a  small part of the camp. . . I doubt if  they even knew it was there!

I don't call him Dad to his face because I can imagine how it would feel to have a 49 year old overweight, bald guy call you " Dad." ("Slightly," overweight. . . I remind my wife.)
Bob has loved the woods as long as he can remember. His father also worked the woods. While working in the timber industry, Bob raised a wonderful family, putting each one through college. Bob is a logger from the old school. He understands and respects the woods and  believes in good forest management.  Using his keen eyes during the years he worked in the forest, Bob made mental notes of many "Ghost" areas such as this.

His work in the woods started  at the close of the ‘crosscut saw era.' Chain saws were already available but still expensive, heavy and undependable. During the last few years, before his retirement, the trees had been harvested with giant hydraulic shears mounted on special built tractors. But the crosscut saw still plays an important role in the tiny U.P. town of Amasa.
Each year the town fills with family members from almost every state like a special ‘town reunion.' The local fire department hosts a myriad of fun games and contests. . . (not to mention great food, including the best sweet corn I've ever enjoyed!)

One of the feature events is the crosscut saw competition. The night before the festivities,  fire fighters place a large, freshly peeled log on a wood cradle for the contest. Each year one of the firefighters has the responsibility to get the saw to a skilled crosscut saw sharpener. Usually it is Bob who gets this handled. . . this year presented a problem. Sadly  the old, highly-skilled saw sharpeners are dying out! As it turns out, this trade is quickly becoming a lost art!
Fortunately the widow of  such a craftsman knew about Bob's dilemma.  She offered Bob her late husband's tools along with a "good luck" wish.  Among  the tools was an antique crosscut saw sharpening kit complete with a gauge for setting the raker teeth height, a setting hammer and angle setting jig. . . everything except a file! Even folded in the old box was a fragile yellowed instruction sheet which Bob studied very carefully. On the afternoon of July 3rd, he started the project. While I steadied the blade and held the light, Bob worked into the evening filing down both sides and setting the proper cutter angle. The next day at the crosscut competition, we watched with pride as the saw ate through the wood with ease!

Well, many of my friends ask about my vacation and the usual question is "Did you find any treasure?" The answer is yes! I got a chance to ‘touch the past' at the old railroad camp,  I learned the old fashioned art of cross-cut saw sharpening. The best part for me was working with my father-in-law, solving the problem with the old saw blade. It reminded me of the precious times I had spent with my own father who I miss so very much. It may have been just another day for Bob, but it is a  treasured memory for me.

As for the 38-55 shell casing, was it the same shell ejected from the camp cook's gun? Was the old stew kettle the same one George used to prepare that meal over a century ago? You could never convince me otherwise! I learned that the.38-55 was invented in 1884.  The gun enjoyed  an excellent reputation as a deer and black bear cartridge for woods hunting. Many hunters were forever convinced that due to the .38-55's greater bullet diameter it was a far more effective
"big game cartridge" than the .30-30 and not far behind the harder kicking .45-70. In its high velocity loading, it pushed a 255 grain bullet along at over 1500 feet per second. You see, there can be much you can learn from the little items we find. And with a little imagination you can really "Touch the past!"
What a great hobby!


RETURN TO THE FACES OF TREASURE HUNTING